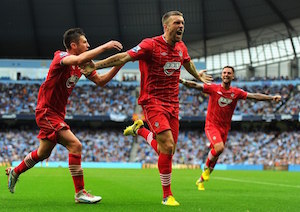 Any bookmaker gets the main percentage of its profit from the usual bets on outcome. It is, in a way, a basic instrument of bookies and players based on which much more complicated bets, strategies and game systems are calculated.

A bookmaking firm usually sets relatively low odds for bets on outcome, since its much more easier to guess how one or the other match will end, compared to bets on score, totals and especially accumulator bets.

In some cases, when a clear strong contender meets an obvious underdog, odds for a favorite’s victory are usually quite low, about 1.1 - 1.2, which isn’t much. On one hand, if you bet on a stronger player, your chances for winning are maximum but in the long run this strategy is net negative.

According to statistics, a strong contender wins 70% of its games, while other 30% are draws and victories of the weaker opponent.  Which means that to earn a profit, you need to play against the favourite, chosen by the bookie. Let’s an example with 100 equal bets, $1 each with 1.3 odds. On average, it is expected that 70 matches will end as you expect. Your profit will be 70х1.3-70=21$. Thirty other games would be lost, and respectively, your lost would be $30. Therefore, while having $100 in the beginning, you earned $21 but lost $30 and are left with $91.

Odds below 1.8 are considered uninteresting, as they don’t cover for possible losses.

It’s also quite reasonable to bet on the underdog’s victory (usually, odds are very high) or on a draw but only after a meticulous analysis of respective team stats, especially of previous encounters (if there were any).

It’s also possible to utilize accumulator bets, however, in this case risk is very high. According to the classical strategy, three matches, in which you have the most confidence, are chosen. There’s no sense to make only one accumulator bet, four at least is much better. The odds should also be no less than 4, because only in this case a profit might be expected.