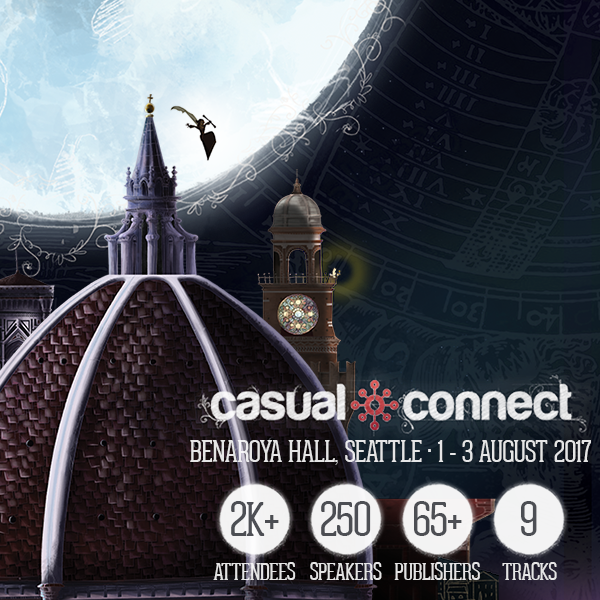 “This year's Casual Connect USA is particularly important,” says Sasha Paleeva, Content Manager of Computer Games Association. “Casual Connect has an established legacy in leading the conversation about the business of games across the globe. We realize the need to adapt and evolve along with the rapid changes within the games industry. With changing perspectives and broader discussions, attendees can expect a new range of conference content and activities that will deliver deep insights on industry issues and practical advice for game developers.”

Highlights of this year’s Casual Connect include:

Casual Connect is a professional conference created to support the mass-market games community by gathering the top developers, publishers, distributors and others involved in related industries for networking opportunities and useful lectures organized by a board of industry members. To participate please register here: ​http://usa.casualconnect.org/joinus.html​. More details on travel and accommodations are available here: ​http://usa.casualconnect.org/travel.html​.

The Indie Prize Showcase receives more than 1,000 game applications during the year. Developers from 41 countries have already submitted their games for the international Indie Prize scholarship in Seattle.

More information about Indie Prize can be found at ​http://www.indieprize.org​. ​The full list of participants will be announced on June 30, one month before the conference. Finalists will compete for Indie Prize’s famed crystal trophies and great prizes at the Indie Prize Awards at 3PM August 3 in the Taper Auditorium at Benaroya Hall, 200 University St., Seattle, WA 98101.

Besides the Indie Prize Showcase for independent developers, Casual Connect offers the Premium Dev Showcase for established developers. More Information on that can be found at http://usa.casualconnect.org/developers.html

In addition to educational lectures, Casual Connect will have an exhibition floor so attendees can connect 1-on-1 with leading game and tech companies, including: Appodeal, Vungle, AdColony, Upsight, MoPub, Vegas World, InMobi, PlayFab, Tapjoy, Mpire Network, Voluum & Zeropark, Humble Bundle, and many, many more.

Along with access to Casual Connect’s famous networking parties, attendees get access to the Pitch & Match meeting system which allows attendees to make their own connections based on what they need. Learn more about Pitch & Match at ​http://casualconnect.org/emails/FAQ.html.

Computer Games Association is an international trade organization dedicated to promoting games and providing educational resources for the game development community. The association hosts annual conferences in North America, Europe, Asia, Kyiv and Tel Aviv; runs online gaming news website ​gamesauce.biz​; and issues research reports on the computer games industry. For more information about the association, visit​http://www.cga.global​. All lectures from past events can be watched at the official Casual Connect ​YouTube channel​.

Indie Prize is a scholarship program for up-and-coming indie development teams who show promise as future leaders in the games industry. Indie Prize offers participants an opportunity to learn and network with other indie game developers and showcase their games, skillsets, and ideas to publishers and potential partners. More information can be found at ​http://indieprize.org/​. The Premium Developer Showcase is an upgraded option of Indie Prize for game developers who want to showcase their games in a larger space. The premium package includes two tickets, a premium listing with logo and a premium showcase location. More information at http://usa.casualconnect.org/developers.html​.